Mulch – Why Is It Important and How Does It Help Trees Grow?

Trees need as much care and attention as any other plant in order to thrive. One of the most important things you can do for them is to mulch – to put a layer of material (also called mulch) on top of the soil around them. Let’s take a look at how important mulching is, and how mulch helps trees to grow and thrive. 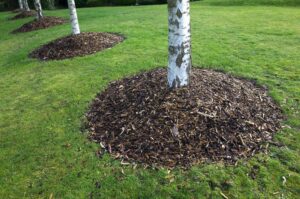 Mulch can be made of almost anything. Most common are things like bark, wood chips, and even shredded newspaper. However, not all mulch is made equal. The mulch here at Johnson Ops is made from trees right here in the Coulee Region, and made by arborists who care about your tree’s health.

These organic mulches release nutrients into the soil, which your tree needs. They do break down over time, though, so you’ll need to add more periodically—generally once or twice a year, depending on the type of tree, and how hot the weather is.

Inorganic materials can also be used for mulch – things like rocks, cork, even plastic, or shredded rubber. They tend to be more decorative than functional, and while they have the benefit of keeping weeds away, they do not release nutrients and support the growth of your trees roots like the mulch at Johnson Ops.

As mentioned above, organic mulches add nutrients to the soil, and reduce the amount of weeds around it. A thick mulch will block out the light, making it difficult for weeds to grow. Mulch can also help prevent water evaporation, allowing your trees to get more moisture with less watering.

What this amounts to is providing the tree’s roots with what it needs, so it doesn’t have to compete with other plants in the area, such as grass, flowers, etc. This in turn helps your trees to grow faster. A mulched tree can grow almost twice as fast as one without mulch.

While mulching is important, you can’t simply pile it on willy-nilly. Some people make what’s called a “mulch volcano,” placing a huge mound of mulch right around the trunk, so it looks like it’s erupting. This can end up cutting off the oxygen to your tree roots. It can also lead to too much moisture retention, causing your tree to be over-watered. Furthermore, that excess moisture can cause fungus and bacteria to thrive, resulting in decaying bark and a diseased tree.

What you want is a layer of mulch that’s no more than three or four inches deep. Pull the mulch away from the tree where it meets the trunk, to prevent it from piling up. Spread the mulch in a circle around the tree, in a radius of between four and five feet. The wider the area you mulch, the more benefit your tree will get from it. When you’re done, check the mulch depth every year and add more mulch as necessary, to keep the depth between three and four inches.

To learn more about the benefits of mulch for your trees, and to get the mulch you need to help them grow and thrive, contact us at Johnson Ops Tree Care at 608-526-6297.

Winter projects What’s the best time of year to trim an Oak Tree?

Get Your Free Estimate